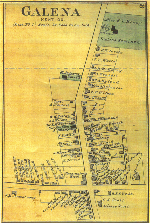 A Town of Many Names

Located at the intersection of Maryland Routes 213 and 290 with early prosperity fueled by its proximity to the Sassafras River, Galena was a crossroads vital to travelers and attractive to businesses and visitors. In fact, the town was originally known as Down’s Cross Roads in recognition of William Downs, who built and Inn and Tavern which became the heart of Galena’s early village. The inn was vital to travelers who were often left weary by carriage rides and needed a place to replenish their horses, seek lodging and stop for a meal. Even George Washington visited the inn on his way to Mount Vernon en route to and from the first continental congress. He traveled through Galena on his eight visits to Kent County. For a breif amount of time the town was later known as Georgetown Cross Roads.

In 1858, Chapter 373 of the Maryland Statutes included “An Act to change the name of the Town of Georgetown Cross Roads to that of Galena and to incorporate said Town.” Galena is said to have been named after a type of silver that was found in a mine near the town in 1813.

The Mystery of the Mine

Citing an article from the Tales of Kent County by The Kent News, geology professor, Frank Benjamin says “There is little geological evidence of silver in the area.” It is possible a lead-based sulfite called Galena was mined there, lending the Town its new name. The mine is said to have been located near an embankment east of Galena called Olivet Hill. The remains of an entrance are no longer visible but there is a sunken area about 15 feet wide by 40 to 50 feet deep. Residents disagree why the mine was shut down. Some believe there just wasn’t enough silver being found to stay profitable and others say it was sealed off to protects it’s riches from British Soldiers during the Revolutionary War. 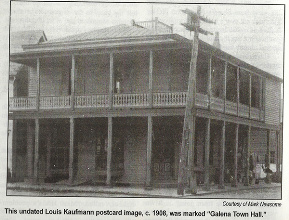 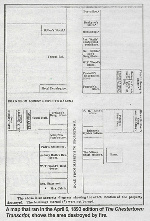 Much of Galena’s past was lost in a devastating fire that occured the morning of March 31st, 1893.

Caused by a defective chimney flue, the fire started shortly after Mr. Henry Parr and his wife Ellen had just finished breakfast. Mr. Parr had walked to his shop when he heard his wife yelling from the kitchen window that the house was on fire. The constable, John Voshell had met Parr that morning and ran to assist him in putting out the fire. By the time they reached the house and threw several buckets of water at the fire, they knew the house was doomed and shifted their focus to retrieving furniture before the flames engulfed it.

The fire quickly spread setting the three story town hall ablaze. Church bells rang to alert residences of the disaster and efforts were quickly made to save furniture and shop goods and start a bucket brigade. Galena was unfit to fight a fire of this scale as there was no established fire department. A call was put out to Chestertown and Middletown Fire Departments who were unable to assist because their equipment required onsite water- something that Galena did not have. Wilmington had pumper equipment but it was determined the damage would be done by the time they could respond. Soon, the town’s only telephone and telegraph were claimed by the fire and calls to anyone else became impossible.

By lunchtime the fire was over. Two dozen buildings had been destroyed and over $30,000 worth of damage was recorded. Most of the town was left homeless but no deaths were reported and only one citizen reported injury.